ETBİS was launched for all e-commerce related stakeholders 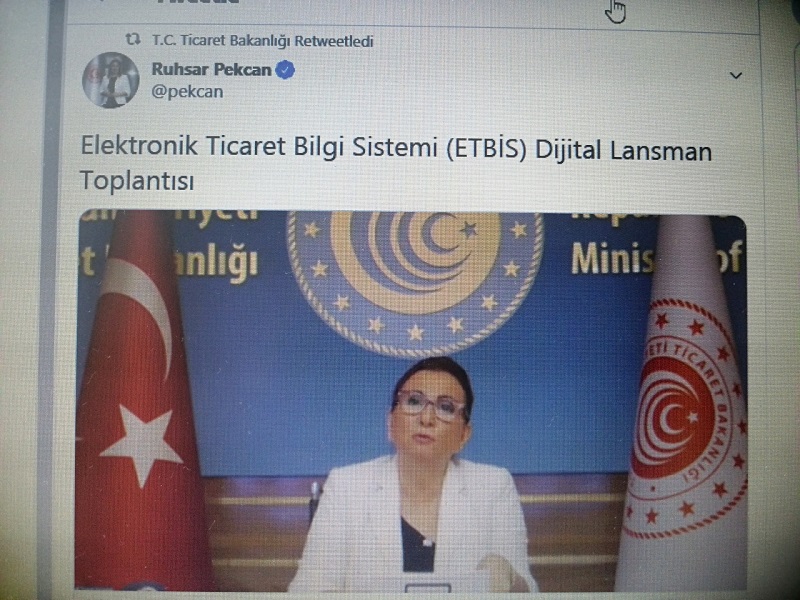 Minister of Commerce Ruhsar Pekcan has announced Turkey’s first e-commerce data compiled at the Electronic Commerce Information System (ETBİS) Digital Introductory Meeting and gave information on the ‘Electronic Commerce Information Platform’. Pekcan stated that e-commerce volume in Turkey was 136 billion TL by the year 2019 and added: “In the first 5 months of this year, especially in the Covid-19 outbreak, e-commerce increased by 48% compared to the same period last year and reached 63.3 billion TL.”

Minister Pekcan made a statement at the introductory meeting as: “As the Ministry of Commerce in our country, we actualized the trust stamp as well as the ETBİS – ‘Electronic Commerce Information Platform in order to develop effective policies related to e-commerce, inform all stakeholders and raise awareness about the sector.” E-commerce is an extremely strategic area for Turkey’s economy and Pekcan stated that they want to share two works of the Ministry of Commerce related to the e-Commerce sector. The first of which is ETBİS and the other is the e-Commerce Information Platform, which they developed as a guide for entrepreneurs and consumers. Expressing that the tradespeople operating in certain business lines and relatively inexperienced companies in the field of foreign trade offer great opportunities in terms of developing their business activities and enabling them to carry out foreign trade activities; Pekcan stated that, small companies, entrepreneurs and manufacturers are able to promote their products worldwide thanks to e-commerce.

‘eticaret.gov.tr’ is open to all companies and citizens free of charge

Pointing out that e-commerce has made a significant progress in recent years, it is still a relatively new field in the global economy, Pekcan expressed: “Concrete and scientific data are needed in this sector to develop policies for companies to use e-commerce effectively. Therefore, as the Ministry of Commerce, we acted very proactively and implemented ETBİS, the Electronic Commerce Information Platform and the stamp of trust. You can find many information and resources on ETBİS and the Electronic Commerce Information Platform at ‘eticaret.gov.tr’ which is open to all companies and citizens free of charge.” Pekcan stated that one of the features at this website is the ‘Registered Site Inquiry’ and continued as: “With this feature, consumers will be able to query the e-Commerce site they want to shop from. Is this e-commerce site a member of the ETBİS, do they have a stamp of trust, are there any promotion, advertisements and communication channels regarding this e-commerce site and many other questions will be answered through ETBİS. Beyond these, there is an “e-Commerce Academy” in our platform, which is designed as an e-commerce information source. Through this academy, we provide e-Commerce and e-Export trainings online and free of charge to our businesses and consumers. ‘In the e-Commerce Academy; 74 training documents and 33 training videos covering many topics ranging from e-commerce site setup to e-export were made available to our citizens. With the ‘e-Commerce Consultant’ feature on the site, we have made the site usage very easy and personal. The platform also includes up-to-date news and reports on e-commerce.”

The airline sector took the first place in e-commerce with 15.3 billion TL

ETBİS was launched for all e-commerce related stakeholders